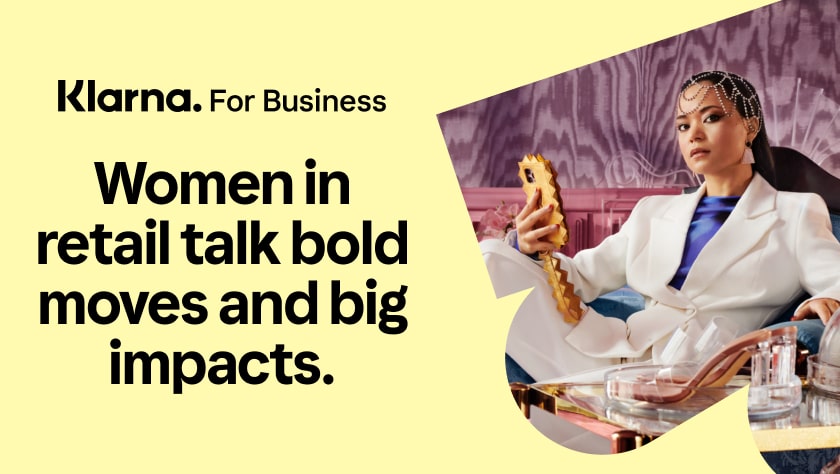 In celebration of International Women’s Day and Women’s History Month, we asked women leaders from Klarna ANZ and our retail network across Australia and New Zealand to share with us the unconventional choices that have had the biggest impact on their careers and businesses.

Challenging the status quo has been a critical part of Klarna’s approach since our earliest days (in fact, it’s one of our leadership principles) so we were excited to learn more about the bold moves these inspirational women in retail and ecommerce have made.

From leaving comfortable jobs to pursue the unknown to joining a bodybuilding team and taking overseas opportunities, delve into the decisions that have shaped their careers in retail and e-commerce.

What unexpected or unconventional choice has had the biggest impact on your career or business?

Prue Thomas – General Manager Marketing and Digital, Oroton
I’m not sure I have only one unconventional choice – I’m nothing if not a living conundrum in the eyes of friends and family! I think the most consistent unconventional and deliberate choice I have always made professionally is to question how comfortable I’m feeling in a moment, is complacency creeping in. If I’m too comfortable, it’s too easy or everything is going too well then I’m not pushing hard enough or taking enough risks. Whilst I may complain in the moments when it’s a little overwhelming they are actually the moments I thrive and do my best work.

Katrina Ang – Acting Domain Lead and Head of Marketing, Klarna ANZ
The boldest career choice I’ve made was to leave Westfield without another gig lined up. Westfield was a traditional global, matrix organisation and for years I just knew nothing better. I’d built my career there – progressed to a senior leadership position, had both my girls while working there – but when I decided to leave I was suddenly unemployed, with two dependents. It was really unfamiliar territory for me, but I soon landed my next gig at Zip Co, on a contract to roll-out their first global brand in 20 weeks. And the rest is history. 🙂

Jennifer Petropoulos – Head of Marketing, Witchery
The most unconventional choice I made in my career was to follow my sister overseas and move to London on a bit of a whim. I had such a great role as Brand Manager for Portmans and Jacqui E, but got swept up in the excitement of moving overseas and didn’t really consider what I would do when I got there (and working in a bar was not on the cards). It was also the year of the global financial crisis, so I was especially fortunate to find a great retail marketing role. I started contracting for TK Maxx, looking after their digital channels, which eventually led to helping launch eCommerce for the brand, and ultimately taking the position of heading up Marketing for the UK and Ireland. The network that I made in those four years is still with me today and has followed me around the world. I still can’t believe this Aussie girl landed a role like that, you just never know what will happen unless you put yourself out there.

Anna Vincent – Senior Manager, Market Expansion, Klarna ANZ
Early in my career I was encouraged by my CEO to take on a leadership role that was accountable for the revenue generating part of our business. It was a huge step up, and an exciting but daunting challenge. I wasn’t an obvious choice for the role, I didn’t think I was ready for the role, nor would I have put myself forward for it. It gave me exposure to running a large, operational business and escalated my career exponentially.

Females pulling females up in their careers is key in achieving equality in all levels in a business. I am so grateful to have experienced that leadership early in my career and challenge myself often to ensure I pay it forward.

Dominique Lamb – CEO, National Retail Association
The single biggest decision to make the most impact on my career was actually to invest in myself and my wellbeing. I decided to join a body building team because it absolutely terrified me and I figured if I could do that then I could do absolutely anything. In fact 6 months down the track when I was offered an unconventional legal role at the NRA – I chose to do it, to step up despite my concern that I wasn’t up to the challenge because I had learned the value of backing myself and I wanted to be the kind of person, I was looking for in a role model.

Emma Mani – Head of People, Klarna ANZ
A few years back now I agreed to take on a Product Manager role for a project that was based in a region outside of Australia, an awesome role doing something I had never done before. But saying yes to the opportunity was in itself an unconventional choice – at the time I had three young children and this role required fortnightly travel.

For a period of a little over 12 months I was away from my family every second week. People questioned my choice and told me they didn’t know how I’d cope being away from my kids. What struck me most about this rhetoric was that if it was my partner who was traveling and away no one would bat an eyelid. It really demonstrated to me just how far we have to go to break the bias that women face.

As it happens, I thrived in the role and so did my family (aided of course by an awesome partner and supportive leader). I’m glad I was able to set an example for my children that being a mum doesn’t mean you have to forgo professional and personal growth.

Yani Lehman – Head of Co-marketing, Klarna ANZ
In a move that shocked many people in my life, I left a job and company that I loved after realising I had gotten too comfortable. I worked for the Qantas Group for almost 15 years, but when I challenged myself to think about my future a few years ago, I realised that in order to continue to learn and grow, I needed to expose myself to new ideas, new industries, different ways of working – be bold and think outside my square.

Klarna partners with leading fashion and lifestyle platform, THE ICONIC.

COS launches exclusive partnership with Klarna.

New to the Klarna fam in August.