The Swedish merchant Adlibris has undergone an ‘Amazon-esque’ transformation in recent years, going from an online bookseller to a fully-fledged e-commerce group. In this article, COO Henrik Oscarsson explains Adlibris’ strategy, their growing pains, and how they turned balls of yarn into a 10 million euro business.

Since the mid-90’s, Adlibris and Bokus have been competing for the title of Sweden’s largest online store for books. Although that rivalry continues, in recent years Adlibris’ eyes have also been set on a bigger prize.

While Bokus is still going all-in on books, Adlibris has broadened their scope by launching new product lines and acquiring several online retailers that have nothing to do with books. Their empire now includes Bamba, an online store for toys and children’s clothing; Discshop, an online retailer of movies and games; and Roliga Prylar, a reseller of gadgets and gizmos.

“Nowadays, Adlibris is a fully-fledged e-commerce group,” says Henrik Oscarsson, Chief Operating Officer responsible for all of the vertical stores within the Adlibris group.

Perhaps inevitably, comparisons have been made between the ambitions of Adlibris and Amazon. At first glance, there are some similarities between the two, notwithstanding the enormous difference in sales and size. But Henrik Oscarsson and his team are envisioning a much larger Adlibris. They are currently “planning for massive growth”, he says.

“Our revenue this year will be 240 million euros and by 2021 we want to double that,” he contends. “We have to become substantially larger to finance our current investments in logistics, IT and customer experience. This is a fast-moving business, and if you rest for just one minute, you will be left behind.”

Adlibris is indeed a long-timer in the e-commerce industry, having been founded in 1997. Seven years later they were acquired by the Swedish media conglomerate Bonnier.

In the mid-2000’s they started working with a newly founded payment service provider called Kreditor, now known as Klarna. The partnership has lasted ever since.

Adlibris’ big journey of transformation began in 2012 when the media group decided to centre their efforts on building an ecosystem in e-commerce around the book selling site.
“Traffic is crucial in online retailing and Adlibris.com has about 30-35 million visitors per year, so we didn’t have to start from scratch and spend a lot on advertising,” says Henrik Oscarsson.

By 2015, the new Adlibris platform was finally ready to launch. The newly formed e-commerce group didn’t stray too far from the world of books initially, selling goods you can normally find in a well-stocked bookstore such as calculators, board games and puzzles.

Soon, however, they stumbled upon a ‘sleeper hit’ of a product that steadily grew in sales: Yarn.

At first, they resold external brands, but as demand kept growing Adlibris turned to factories in Turkey to establish their own private labels and sell them directly to customers.
“No one figured balls of yarn would become such a hit. For 2018, we budgeted to sell 10 million euros worth. We will not quite reach that target, but still, it’s a lot,” Henrik Oscarsson says.

10 million euro product lines are scarce within the Swedish e-commerce industry. To put things into perspective: If the yarn business were for some reason to be spun off (no pun intended), the new company would immediately make it onto the list of Sweden’s 100 largest online retailers compiled by the trade journal Ehandel.se.

Why did you decide to start selling yarn?
“We did see some potential since women make up 60 to 70 percent of Adlibris’ target audience. On top of that, the pricing for yarn is straightforward and it’s easy for the customer to make comparisons,” he says. “Take reservoir pens or notebooks, for instance. Is a price tag of 3 or 6 euro a bargain? No one really knows.”

With balls of yarn it’s a different story:
“Yarn lovers know exactly what a certain yarn is supposed to cost. If you can offer a lower price than your competitors, you have a great starting point,” he says. “When we launched, there were some people on forums and social media saying that our low prices were disrupting the market. That was the best PR we could have dreamt of.”

In general, when deciding on new product lines or online retailers to acquire, Henrik Oscarsson wants to make sure there is an overlap with Adlibris’ core audience and that the market they’re entering is not over-crowded.

In July, Adlibris launched a new service called Adlibris Go, offering deliveries within 60 minutes in central Stockholm for ready meals, sweets, toothpaste and the like. It’s not a huge business and probably never will be, Henrik Oscarsson admits.
“But I do reckon that we can learn useful things from Adlibris Go and feed them back into the Adlibris core,” he says.

For instance, he hopes the service will offer insights into how to approach the so-called last-mile problem, in order to shave time off deliveries.
“Deliveries are the last hurdle for e-commerce. If the time gap shrinks even more, there will be hardly any point in going to physical stores,” Henrik Oscarsson says. 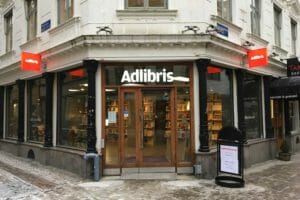 From online to offline

Despite their digital roots, Adlibris has in fact set up some stores in Stockholm since beginning their transformation in 2015. In April this year, they launched another one, with just shy of 1000 square meters of floor space.

What’s your game plan for the stores?
“Their main purpose lies in advertising, marketing, and PR,” he says, underscoring the potential relational aspects of physical stores. “We use them for book signing events and meet-ups for yarn lovers.”

In addition, he says, stores could act as important relay points when goods are delivered from Adlibris’ warehouse north of Stockholm to customers in the city center.
“Without physical stores, we could never have launched Adlibris Go. But one thing’s for certain: in terms of revenue and profits they won’t have much of an impact,” Henrik Oscarsson says.

While broadening their scope since 2015, Adlibris has made sure to simultaneously keep polishing their core. The supply chain for books has for quite some time been almost fully automated. The one thing still requiring some human input is calculating first-day order volumes for new, big-name releases, according to Henrik Oscarsson:
“Apart from that, algorithms make all the decisions, using current and historical demand adjusted to the time of the year. Adlibris offers nearly 15 million different titles. Without automation, that would be impossible.” 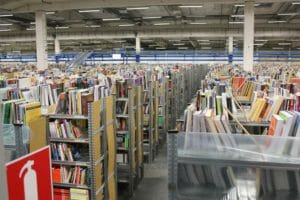 How Adlibris turned balls of yarn into a 10 million euro business:

1. Knowing their audience.
They like books, but what else might the 30-35 million yearly visitors want to buy? Why not yarn?

2. Figuring out that buyers of yarn are price-sensitive.
By undercutting their competitors, Adlibris established a bridgehead in the market.

3. Finding a white spot in the market.
Before deciding on selling yarn online, Adlibris noted that the market was fragmented and dominated by physical sales.

4. Moving up the supply chain.
By establishing private labels, Adlibris could sell yarn directly to customers and raise margins.

5. Unwittingly creating buzz by ‘disrupting’ the market.
When Adlibris started selling yarn online, some users on social media were complaining that their prices were too low. “That was the best PR we could have dreamt of,” Henrik Oscarsson says. 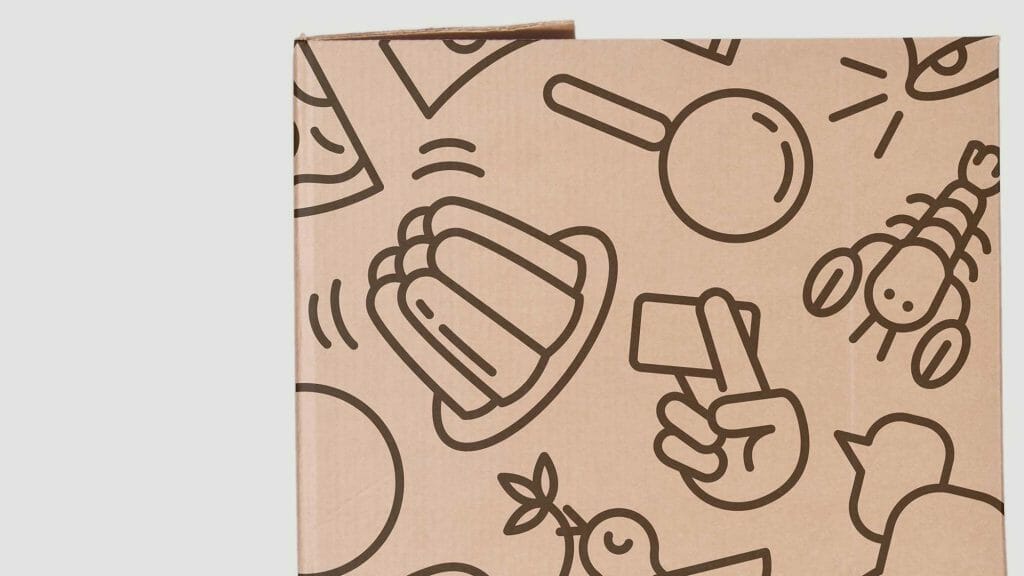 What is a payment gateway? Meet the magician behind ecomm payments. 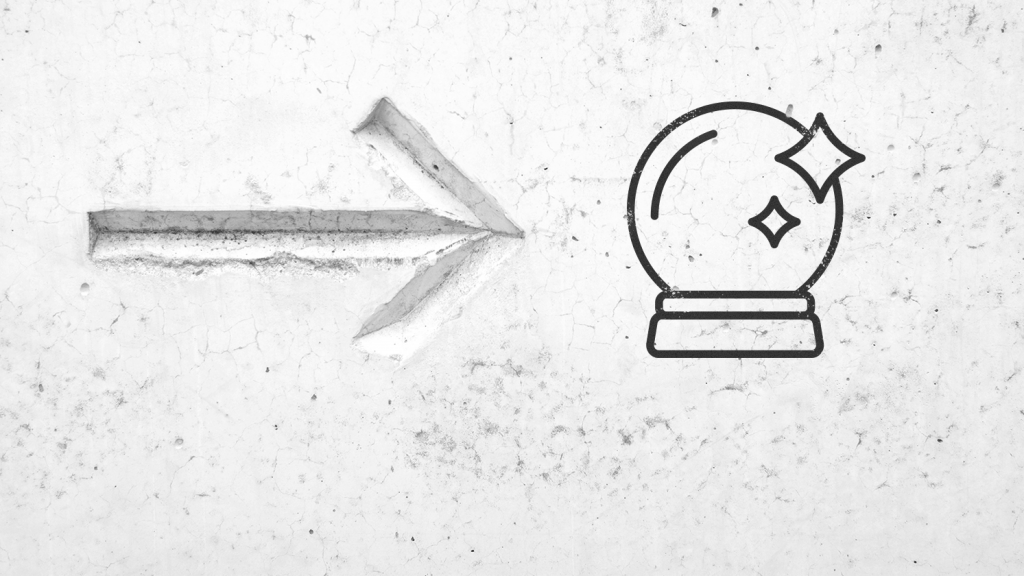 Use these templates to get more sales-boosting reviews.