Millennials Are Ditching Credit Cards – What Merchants Need to Know.

Traditional credit cards are fast becoming an outdated payment method, especially among young adults. If you’re in the business of selling more pricey items, the question becomes: How do you get through to this credit card-averse generation? You’re about to find out.

A study published by Gallup revealed a few years back how credit cards were losing traction. The share of people who said they didn’t have any credit cards increased significantly between 2008 and 2014: 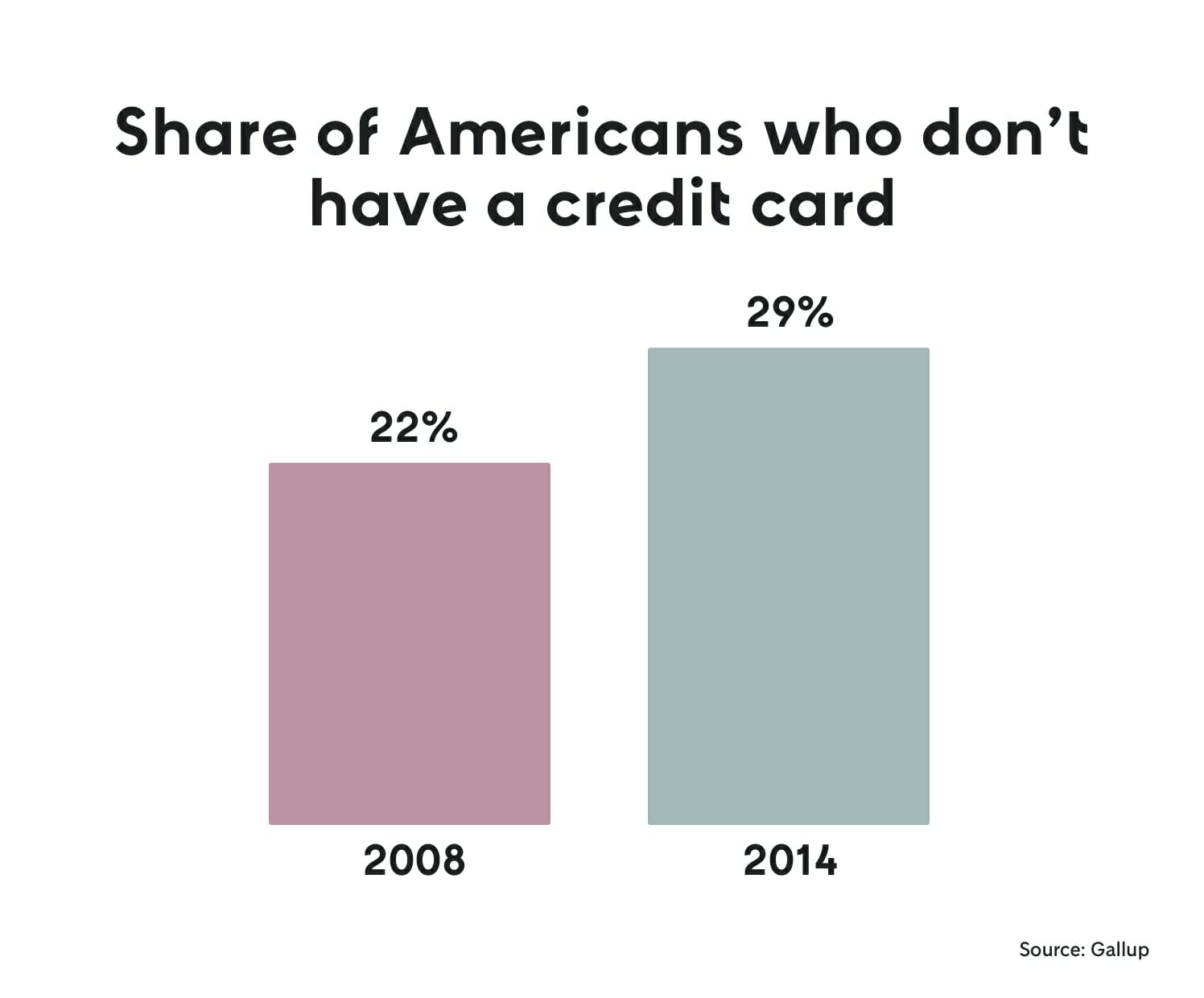 It’s hard to predict when traditional credit cards will phase out completely, but clearly their heyday has passed.

Plenty of people are adopting better alternatives that involve neither high-interest rates nor a card you have to carry around in your purse or pocket.

Gallup sums up their findings by saying: “This suggests that credit cards – a staple of American consumer life for decades – might not be as vital a financial tool to individuals as they had been in the 1990s and 2000s when Americans often used their credit cards to make ends meet.”

67% of Millennials don’t own a credit card

Young adults are unlikely to ever pick up the outdated habit of paying with credit cards. One study from 2016, commissioned by Bankrate and compiled by Princeton Survey Research Associates International, showed that 67 percent of millennials (aged 18 to 29) don’t have a single credit card to their name.

“They grew up in a world where the economy was tanking,” explains David Pommerehn, senior counsel with the Consumer Bankers Association, in a comment on the study. “There was great concern about jobs and debts and paying off bills.”

In 2010, in order to protect people under 21 from ending up in credit card situations that could get out of hand, new regulations went into effect in the US which tightened the requirements for approving a credit card application. Now, most millennials wouldn’t even bother applying; they simply want to avoid ending up in growing debt with high-interest fees that they struggle to pay off.

But – here’s the kicker – people are people after all, and every now and then they still want that $400 dollar jacket. Or that new $1000 laptop. And that $600 fridge when their old one breaks down.

When people desire to buy but don’t have the savings to pay cash or don’t want $1000 leaving their bank account all at once, the result is often that they back off completely or buy a less expensive product.

“Offering a consumer-friendly payment method that provides an easy, short-term, no-interest solution that doesn’t require a formal credit agreement to these customers is great for your business. You are likely to convert better, increase the number of completed purchases and bump up the average order value” says Daniel Jensen, Vice President of Product at Klarna.

Many people – especially the younger generation – want this kind of simple and flexible payment solution that suits their financial situation without forcing them into unfriendly credit agreements with unfair interest rates.”

“With our new solution, we have tried to build a payment method that really speaks to the needs of our customers, both on the consumer side and the merchant side. Consumers are given the power to smoothen out their cash flow while merchants have a fantastic opportunity to improve revenue” says Daniel Jensen, who is responsible for Klarna’s Pay Later payment method suites.

He explains how this new product works:

“Customers are offered the ability to slice their purchase into four equal payments. They only pay one-quarter of the price tag upfront, and the rest is automatically collected later; over three additional instalments, every two weeks following the shipment of the purchase. In the UK the payment is sliced into three pieces 30 days apart. The distribution of these payments is designed to match the timing of our consumers next paycheck.”

Pay Later in parts helps merchants improve two key selling metrics. By removing a roadblock to selling you increase your revenue, while getting higher priced items in the hands of customers increases your average order value.

“The bottom line is this: Some customers have only a certain amount of disposable income each month, and maybe they don’t want to burn $400 right off the bat on a new jacket. However, being able to split the cost is enough to solve that issue for them. We take care of all the customer service regarding the payments. Merchants don’t need to be involved in that at all,” explains Daniel Jensen.

One company that recently integrated this solution is Rancourt & Co, a large retailer of men’s shoes handcrafted in the US.

“By offering the Klarna option to our quality-focused consumers, we are giving them the power to purchase our handmade goods with flexibility and without limiting their choices based on price,” says Kyle Rancourt, VP of Brand Management at Rancourt & Co.

To them, this is part of keeping a competitive edge.

“E-commerce has only scratched the surface of what’s possible”

How to turn your idea into a full-featured online store in 90 days.