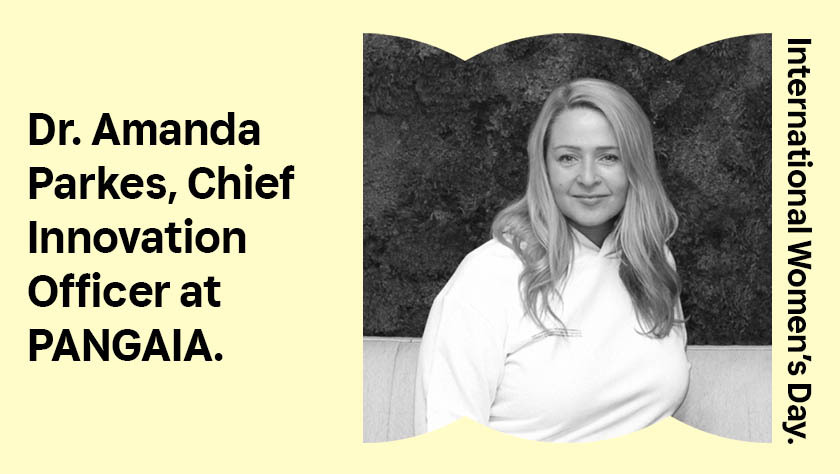 To celebrate International Women’s Day this year, we’ve sat down (virtually) with an incredible range of inspiring, powerful women across the retail and eCommerce industry. We wanted to know what it takes to get to the top, how to overcome challenges and the top tips for future female leaders.

Today we sat down with Dr. Amanda Parkes, Chief Innovation Officer at PANGAIA.

How did you start your own business, where did you get the idea for the concept?

Together with the PANGAIA Collective, I started the company alongside six other founding members. Pangaia was born from a desire to manifest and commercialize the amazing breakthrough innovations happening in the space of fibre and material science, things that I was observing in laboratories and in small startups across the globe, but that did not have a direct route into the current fashion supply chain. With Pangaia, we wanted to find a way to demystify science and become a bridge-builder between science and fashion, through partnering with the world’s leading research institutions, laboratories and scientists, or through pioneering our own breakthrough patents. We see Pangaia as a demonstration to the industry that cutting edge innovations can be responsibly and reliably incorporated into new products at a reasonable price point and as part of our business model, we will continue to push the methods for bringing innovation to the market.

How did you make the leap from employee to business owner?

My career has certainly not followed a linear path but I do think all the disciplines I’ve pursued have led me exactly to where I am. The role I have now at PANGAIA, as a fashion scientist, didn’t exist when I was in college, so I have been designing it as I go. Starting as a mechanical engineer/product designer at Stanford, while also studying art history, I moved into the art world to curate and design exhibits, which opened up my passion for informal science education. Going back to grad school at MIT, I pursued a PhD combining computer science and material science, which led me into the world of biotech and biofabrication. After MIT, I founded an algae biofuels company and ran a design studio working on interactive and wearable tech projects for both start-ups and large companies. After many years of working in tech, however, it became clear that technology isn’t actually progress if we are destroying the planet in the process. A shift to focusing more directly on responsible innovation and production became inevitable and the search for how technology and nature can complement each other brought me to Pangaia.

Who is a woman who inspires you?

What milestone are you most proud of?

This question is a little like being asked to pick a favourite child, which I can’t do, but I will say what I’m most proud of is not a single project but the mindset we have created around ‘high tech naturalism, incorporating a duality of thinking where nature and technology are no longer at odds with each other. In developing our research philosophy, I have thought a lot about this concept, attributed to F. Scott Fitzgerald, “The truest sign of intelligence is the ability to entertain two contradictory ideas simultaneously.” The 20th century emerged with technology being developed at odds with and often in the destruction of nature, and we are now set with the monumental task of reversing this, in what seems to be contradictory to progress. But the true solutions lie in how we can hold nature and technology as simultaneous pillars of importance and inspiration, embracing and promoting nature while using technology to augment and shape functionality.

It’s never easy being the first in any field. To pioneer is to go away from the mass and do something different and bespoke. We work with the most advanced scientists, researchers and technologists in their areas – from fibres to packaging – and with forward-thinking factories and makers in Europe. We always prioritize and invest in achieving the highest quality, ethical standards and latest innovations. I see our long term objective to be around changing the culture of fashion to have a focus on responsible innovation, proving that this is a solid and successful business model which others will want to emulate. A return to the bioeconomy, where materials, agriculture, and energy are intrinsically linked, will be the ideal linking and transcending industries. PANGAIA has a big vision for the future and I’m excited to see where the team is taking the business as we continue to scale.

What 3 traits do you think are most important when running a successful business?

What’s the best business advice you have ever received?

Surround yourself with people that are smarter than you and with different backgrounds and experiences. Diversity is the best way to expand your own perspective and the perspective of your business.

Any advice to future entrepreneurs?

Don’t be in such a hurry. Yes, innovation needs to move fast, especially around climate change but taking the time to think and act properly will pay off for long term goals. There are reasons why the tortoise wins the race.

Achieving a vision with Dimple Patel at Trouva

Camilla Giesecke in conversation with Fanny Moizant, Co-Founder and President of Vestiaire Collective

Navigating the route to success with Huda Kattan, Founder of Huda Beauty