Media icon Joanna Coles on slowing down and conquering your fear of failure. 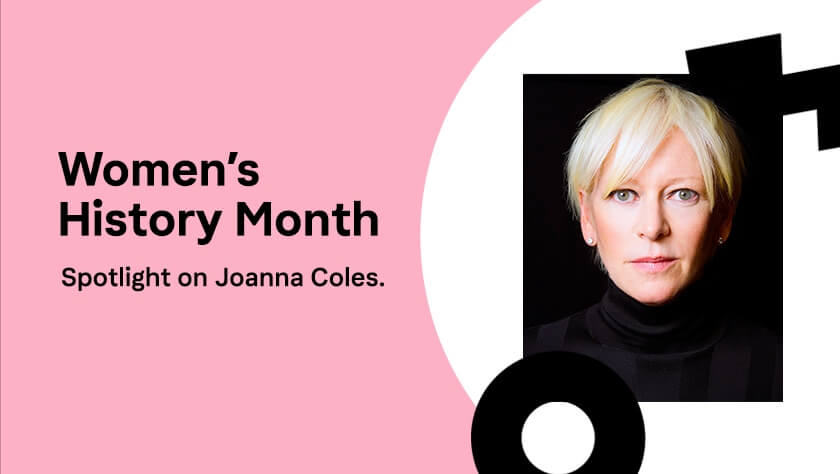 This month, as the world celebrates women, Klarna is spotlighting a selection of female business owners and industry leaders within the Klarna network to share their stories of entrepreneurship, challenges and growth.

Joanna Coles is the CEO of Northern Star Acquisition Company, an executive producer on Freeform’s The Bold Type, and a board member of Snapchat, Sonos, Density, Klarna—the list goes on. She was formerly Chief Content Officer at Hearst Magazines and Editor in Chief of Cosmopolitan Magazine.

Hi Joanna! Tell us your story. How did you get to where you are today?

I’ve always been interested in journalism and media, even as a child. I created magazines when I was 10 and would send them around the neighbourhood. I was lucky enough to know that I wanted to be involved in media and storytelling, and that really led from one thing to another. I’ve also always been curious—I try and take unusual meetings and I like to try new things. A sense of curiosity and excitement over trying new things has gotten me to the place where I am now, which is really a portfolio of things that I like to do.

Has being a woman empowered you to make any bold decisions in your career?

I don’t spend that much time thinking about being a woman in any particular industry I’m in, but I am conscious that there are fewer women to look to who are senior who you can learn from. That said, those that I have come across have always been very helpful, so I don’t subscribe to the idea that it’s got to be a zero sum game and that there can be only one woman in the room. I’ve always found it to be much better when there are many women in the room.

What’s one challenge you’ve experienced as a woman in a leadership position?

The difficulty with being a solo person in the room—whether that’s being the only woman in the room, or the only diverse person in the room—is that you’re expected to represent an entire group, and it’s harder to have the informal chatter. You are often left to have informal conversations around things that you have less interest in, because you’re not part of the dominant group. So I would say that that has been a challenge, though it’s definitely gotten easier as more women have gotten into serious positions.

Share one business tool, tip or trick that has changed your life.

I don’t think there’s any one single tip or trick that’s changed my life, but I do think it’s important to be able to delegate and ask questions. It’s also important to talk to people who are standing on their own and aren’t talking to anybody else, and to make them feel included. It makes you feel better, and they are always grateful.

What are two products that have helped you be more creative and productive in the last year?

I love my iPad. I can do everything on it and its light, so if you’re traveling you can throw it in your bag. I much prefer it to a laptop and it’s much more intuitive than my cell phone, so I don’t have to keep remembering what does what, where.

I also love my headphones, because I can go for long walks and listen to my favorite podcast, which is currently the Pivot podcast with Kara Swisher and Scott Galloway, and books on tape. I love to be able to exercise, listen and learn at the same time.

What was the biggest lesson you learned in 2020?

One lesson that I learned in 2020 was that I was over-traveled and very easily distracted by events and other things. Having been forced to slow down, I’ve been able to focus and try new things, which has been really exciting. I didn’t expect it to be a silver lining of what has been a brutal year for many people, but I’m not going to go back to over traveling or go to every event I can, because I can get a lot done by just sitting quietly and focusing.

What about the retail and technology industries are you most excited about in 2021?

I am very excited by the acceleration that COVID-19 has given to direct-to-consumer businesses. I recently started a SPAC called Northern Star and our first merger was with a company called BarkBox, which is a subscription box company. I’m big into subscriptions; they are a really efficient way to buy all sorts of products that you don’t want to traipse off to the store to get, and I think many people have seen the advantages of getting basics delivered every month because it’s just easier. If you think about getting dog food delivered or all of the beauty products you use regularly, I think it’s huge. It’s just so much easier to be a customer these days than it was even five years ago.

Do you have any advice for aspiring young women or other female business leaders?

Also, don’t be afraid to keep learning. Don’t ever not do something because you’re not certain you can do it. At least try, and if it all goes wrong, it will lead to something else anyway. I think young women, and certainly I was, are very fearful of failing and getting things wrong. You’ll quickly realize that failure and mistakes just lead to other things, so, it’s okay. Young women aren’t given that message often enough.

What’s next for you? Do you have any exciting coming up in the next year or so that we should know about?

I’m excited to say that The Bold Type Season 5 is shooting again in Montreal. I’m also very excited about this new phase in my career of doing SPACs. We just launched Northern Star 3 and 4 in the market, so we’re busy looking for companies to merge with and it feels exciting to be doing something new. It’s using a lot of the skills that I have, but it’s a new arena for me, so I’m learning a lot, which I love.

Are you a retailer ready to join Klarna?