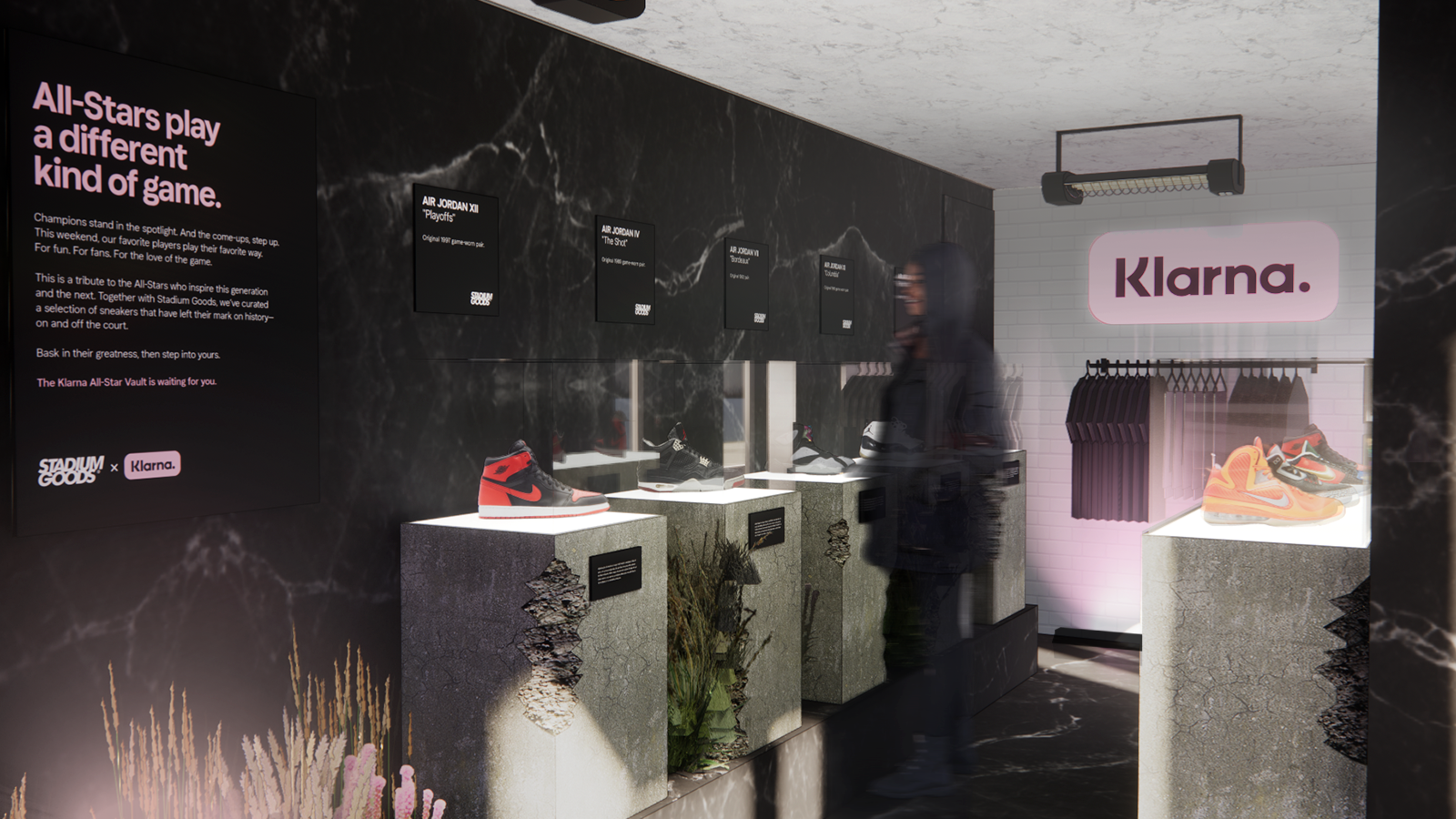 New York, NY – Feb 15, 2022 – Klarna, a leading global retail bank, payments and shopping service, today unveiled “The Klarna All-Star Vault,” an interactive activation celebrating the connection between fashion and professional basketball throughout its 75-year history. From February 18-20, the pop-up in Cleveland Public Square will bring fans closer to the game with one-of-a-kind merchandise giveaways, fan experiences and access to some of basketball’s most coveted sneakers during one of the sport's biggest weekends. Additionally, fans around the world will be able to access the experience digitally to choose Zach LaVine’s style destiny, explore a gallery of iconic game-worn sneakers curated by Stadium Goods, shop basketball-inspired merchandise online, earn rewards and be entered for giveaways at KlarnaVault.com*.

“The Klarna All-Star Vault” experience will give fans in the US and worldwide the opportunity to vote on Klarna ambassador, All-Star and Chicago Bulls player Zach LaVine’s pre-game tunnel look, to be debuted on Sunday, February 20. LaVine’s stylist has curated two potential outfits, leaving it up to consumers to vote for their favorite in the Klarna app starting today, February 15, until Saturday, February 19. Voting will also be open through Klarna's Instagram on February 19. Fans inspired by Zach’s looks can purchase the pieces through the Klarna app.

“My style game has definitely evolved since I first entered the league. It wasn’t something I paid much attention to when I was younger, but now I realize it's another way I can express myself off the court,” said LaVine. “In a way, shopping is like a game in and of itself – you're always hoping to get lucky on the new drop or find something fresh on a deal, and Klarna makes it easier for fans to do all of that in one place with flexible payment options.”

Discussing the activation, David Sandström, Klarna’s Chief Marketing Officer, explains that “as one of the most beloved sports around the world with over two billion fans globally, basketball has had an undeniable impact on our culture as well as the fashion and retail industries. We're excited to unveil ‘The Klarna All-Star Vault,’ our first-ever consumer activation in sports, to celebrate this history together with fans.”

“The Klarna All-Star Vault” will also feature online and in-person activities celebrating basketball’s past and present styles while giving consumers access to exclusive rewards and giveaways, including:

This activation marks Klarna’s continued expansion within the sports industry, following the brand’s recent announcements as the Official Shopping Partner of the legendary Chicago Bulls and Founding Partner of the Los Angeles’ Angel City Football Club.

*Online giveaways and rewards available to US customers only. Full terms and conditions here.

About Klarna
Since 2005 Klarna has been on a mission to revolutionize the retail banking industry. With over 100 million global active users and 2 million transactions per day, Klarna is meeting the changing demands of consumers by helping them save time and money while better managing their cashflow and making informed decisions. Over 250,000 global retail partners, including H&M, Saks, Sephora, Macys, IKEA, Expedia Group, and Nike have integrated Klarna's innovative technology to deliver a seamless shopping experience online and in-store. With over 5,000 employees, Klarna is active in 20 markets and is one of the most highly-valued private fintechs globally, with a valuation of $45.6 billion. For more information, visit Klarna.com.