Klarna introduces new shopping experience and app features to the US 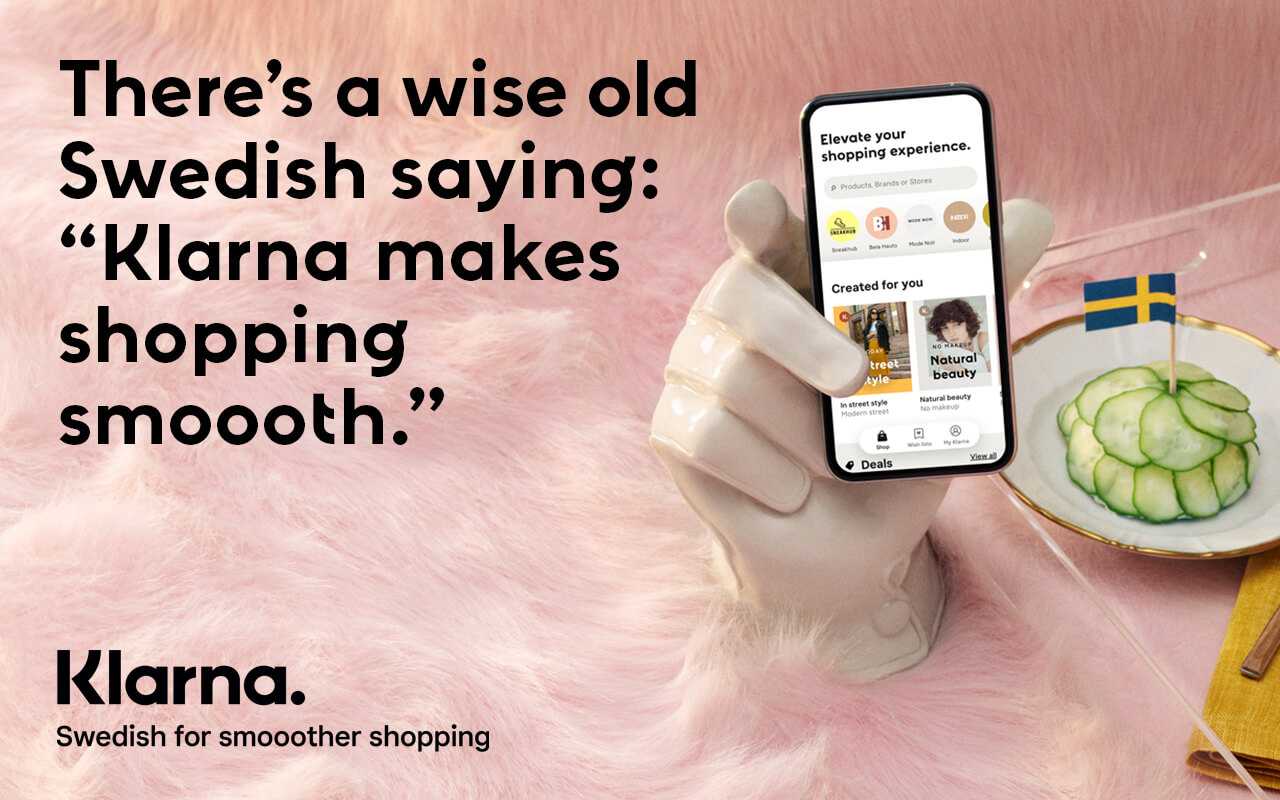 Updates will be spotlighted in new brand launch, “Swedish for smooother shopping” that draws from Klarna’s Swedish Heritage

New York, NY (June 29, 2020) – Klarna, the leading global payments provider and shopping service, today announced updates to its shopping experience including the newly released mobile app that gives users access to exclusive deals and drops, the ability to create and share wish lists with friends and family, and the ability to shop anywhere online and pay in four, interest-free installments. This follows Klarna’s recent news that its industry-leading app now has more than 1 million monthly active users in the US.

To showcase Klarna’s latest product evolution, the company has launched a new shoppable entertainment campaign in the US that humorously illustrates how Klarna is redefining shopping to deliver a smoother end-to-end experience.  Anchored by the tagline “Klarna: Swedish for smooother shopping,” the campaign leans in to Klarna’s Swedish origins to show how the company is providing inspiration, perks and convenience. The 360-degree integrated campaign features a unique series of online films, virtual experiences, shoppable content, custom media partnerships, and giveaways throughout the summer.

“With online shopping at an all-time high, we are excited to continue to build out our capabilities that deliver an elevated shopping experience to consumers in the US,” said David Sandstrom, Chief Marketing Officer at Klarna. “Our latest brand initiative draws on a number of uniquely Swedish cultural elements and adds in a big dose of humor to highlight how Klarna provides value at every stage of the shopping journey, from inspiration to post-purchase.”

Klarna’s new product features and brand campaign come at a time as the company has seen significant recent growth in the US, where it now counts nearly 8 million customers and 4,200 retail partners, including leading names such as H&M, Sephora, The North Face, Timberland and Abercrombie & Fitch. Klarna also recently announced the US launch of Vibe, the first and only loyalty rewards program in the buy now, pay later space. Members of the Vibe program can receive rewards for all purchases they make directly through the Klarna app, no matter what store they are purchasing from, and also when using Klarna at over 200,000 partner retail stores globally.

Klarna partnered with LA-based creative agency Mirimar on the “Swedish for smooother shopping” campaign and tapped Sweden’s own Andreas Nilsson—the director behind Volvo’s “Epic Split” commercial and Expensify’s “Expensify This” interactive film —to transform more than 50 years of Swedish cinema, television, advertising and music videos into entirely new stories that position Klarna as a new, better way to shop. In addition, the campaign will feature an interactive virtual pop up store, shoppable gaming experiences, collaborations with style influencers along with entertaining social activations.

We make shopping smooth. With Klarna, consumers can buy now and pay later, so they can get what they need today. Klarna’s offering to consumers and retailers includes payments, social shopping and personal finances. Over 200,000 merchants, including H&M, IKEA, Expedia Group, Samsung, ASOS, Peloton, Abercrombie & Fitch, Nike and AliExpress, have enabled Klarna’s innovative shopping experience online and in-store. Klarna is ranked number five on the 2020 CNBC Disruptor 50 list, is the most highly valued fintech in Europe with a valuation of $5.5 billion, and is one of the largest private fintechs globally. Klarna was founded in 2005, has over 3,000 employees and is active in 17 countries. For more information, visit klarna.com.