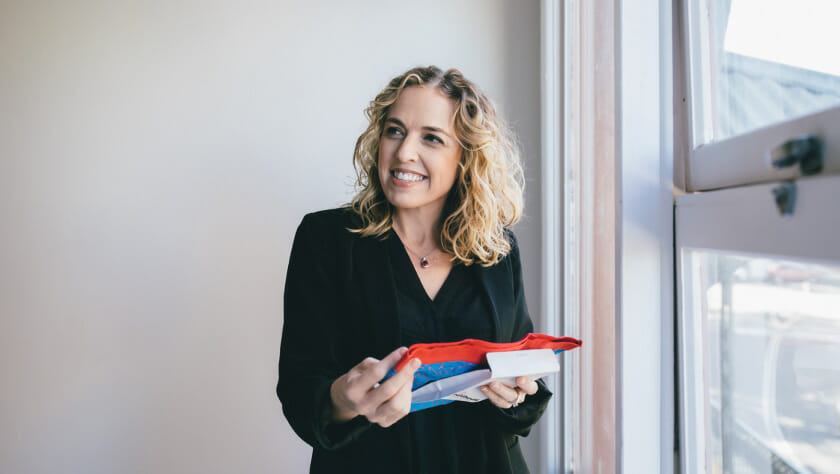 Changing consumer habits is no easy feat, and it’s especially hard when you are speaking to consumers about a subject that’s sometimes seen as taboo. That is why it was key for entrepreneur Kristy Chong to share her own personal story when she launched Modibodi in 2013. She knew that her personal experience would resonate with women because she definitely couldn’t be the only one frustrated with the disposable sanitary products available.

“It was important to put my personal story out there and encourage others to share their own stories,” says Kristy, who started formulating the idea for Modibodi after experiencing light incontinence after the birth of her second child. “I wanted to break down some of the stereotypes and wanted to stand for something more than just a product. From the very beginning we talked about these subjects and normalised the conversation around menstruation and other leaks.”

Kristy spent two years fine-tuning the brand’s period-proof underwear design with textile engineers and fibre companies in Australia and the US. The result is a natural, moisture-wicking, antimicrobial, breathable fabric that’s turned Modibodi into one of the world’s leading period-proof sustainable underwear brands and market disruptor. The business has experienced phenomenal growth, with the last two years seeing Modibodi expand into the UK, France, Germany, US, UAE, Singapore, South and West Africa and Iceland. Kristy says the UK will soon surpass Australia as Modibodi’s number one market.

“We’ve expanded partly from my ideas but from also asking our customers. We have the ideas and we put them forward to our customers and ask ‘Would you buy these? Is this what you want?’”

In addition to changing customer’s lives for the better, by using Modibodi you’re also saving thousands of disposable hygiene products from ending up in landfill. The numbers say it all …. the average woman is estimated to use roughly 11,000 pads and tampons in her lifetime.

“There has been a huge movement towards sustainability since we launched and this product has definitely provided a solution people couldn’t find. Sustainable and actually more effective. The product really has helped us champion that change of behaviour.”

And at its heart Modibodi is an agent of change and is focused on giving back, not only to its customer. To date the Australian company has given over 19,700 pairs of underwear to women in need through its Give a Pair campaign. And in 2021 Kirsty has big plans to keep doing more.

Klarna partners with leading fashion and lifestyle platform, THE ICONIC.

New to the Klarna fam in August.